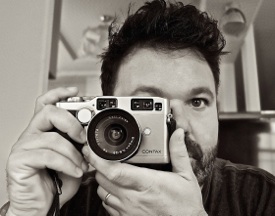 Andy Willinger is an award-winning fine art photographer, digital creative, and branding consultant. With over 25 years experience, he uses his skills as a writer, producer, director, editor, artist, musician, and photographer to create compelling content that is always on target. He provides creative direction and artistic leadership on digital marketing, on-air promo, branding projects and long-form entertainment, meeting the most demanding deadlines and exacting standards.

Andy studied at Boston University, earning a B.S. Degree in Broadcasting and Film. He came to Los Angeles in 1990, where he fell in love with the desert and the sea.  Andy became a top-notch television editor, and was one of the founding members of the E! True Hollywood Story TV series team.  By 2000, he also began writing, producing and directing televised content. He spent 10 years creating numerous on and off-air promotions, Upfront presentations and social campaigns for Game Show Network, having a pivotal role in the rebrand of the network twice.

Andy Willinger is also a noted Fine Art Landscape Photographer, with prints available in art galleries and through private sales. His book of photographs of the ruins of the American Southwest, Desert Oblivion, is available from Blurb Press.